The trail has a 10-foot-wide firm compacted crushed stone surface with 2-foot grass shoulders and wheelchair-accessible grades. The trail is open year-round to non-motorized uses. In the warmer months, the trail can be utilized for walking, jogging, hiking, cycling, and horseback riding. Local snowmobile clubs maintain and groom the trail through winter, allowing for snowshoeing, Nordic skiing, snowmobiling, and dog sledding. Additional recreational opportunities can be found along the trail at designated fish and wildlife waysides. Trail parking is available throughout the corridor. In addition to recreation and immersion in Vermont’s natural landscape, the LVRT offers historically significant and impressive structures such as the Fisher Covered Bridge, the bridges in Morristown and Swanton, historic railroad station buildings, historic stone culverts, a railway workers’ memorial, and more.

**To plan a trip on the LVRT, please click here.**

History of the LVRT Rail Corridor

The Lamoille Valley Rail Trail (LVRT) occupies the former railroad corridor from St. Johnsbury to Swanton, which was constructed between 1869 and 1877 as a segment of the Portland and Ogdensburg Railroad – Vermont Division. The railroad operated under various management and similar names throughout its lifetime. In 1880 the line was renamed the St. Johnsbury and Lake Champlain Railroad (St. J & L.C.). The line was known as “The Bridge Road”, named for the six covered railroad bridges on its scenic route traversing small towns, forest, farmland, and picturesque train stations. The St. J & L.C. provided a connection between Portland, Maine and Ogdensburg, NY. Additionally, there was a connection to Burlington along the Burlington and Lamoille Railroad. at Cambridge Junction. In 1892, a spur line called the Granite Branch was extended from Hardwick to Woodbury to serve the granite industry in that town.

The St. J & L.C. provided a connection between Portland, Maine and Ogdensburg, NY. Additionally, there was a connection to Burlington along the Burlington and Lamoille Railroad. at Cambridge Junction. In 1892, a spur line called the Granite Branch was extended from Hardwick to Woodbury to serve the granite industry in that town.

In its early decades of operation, the St. J & L.C. served the summer tourism industry. Some passengers traveled to their summer camps such as those on Caspian Lake in Greensboro. Others traveled and stayed in the railroad hotels located along the route. 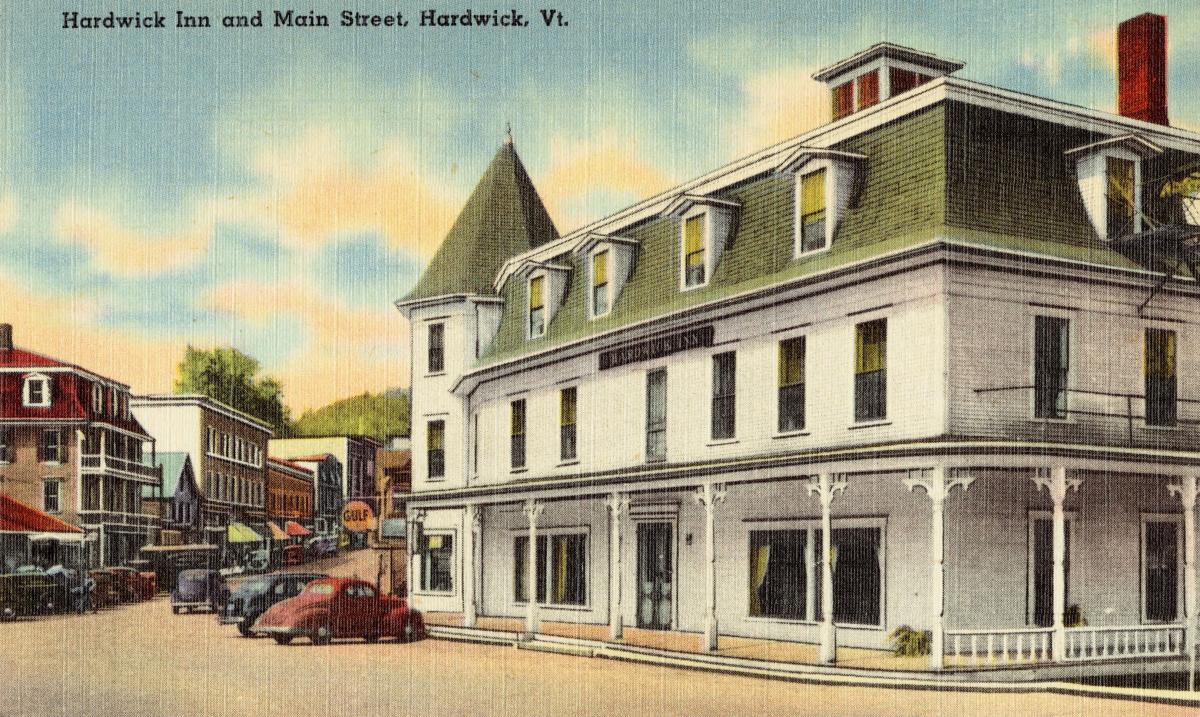 A postcard of the Hardwick Inn circa 1930-1945 in Hardwick, Vermont published by The Riverside Paper Company. Credit: Boston Public Library, The Tichnor Brothers Collection. 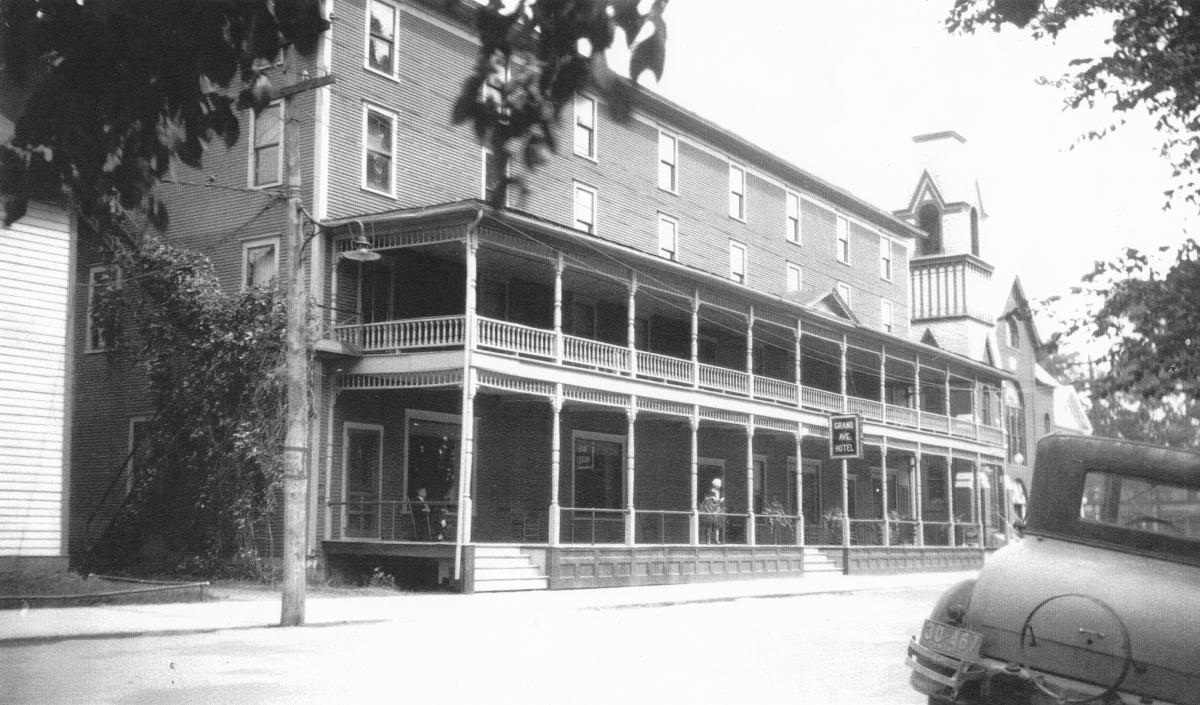 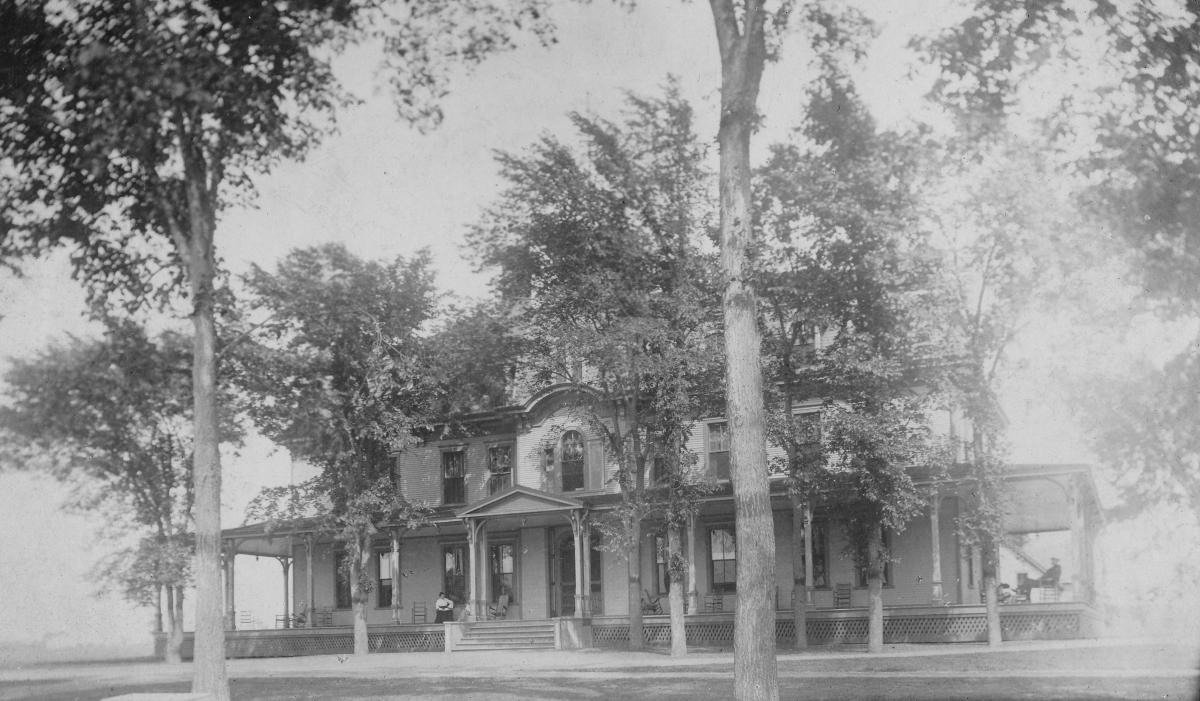 The Bellevue Hotel was purchased by the St Johnsbury and Lamoille County RR, disassembled, and moved in sections along the RR to from Sheldon Springs to Maquam Shore on Lake Champlain in Swanton, Vermont in 1909 where it was remained the Hotel Champlain. The hotel predates 1882. Credit: The Swanton Historical Society

The Eagle Hotel built in 1825 and renamed the Central House in 1866. The hotel was ultimately destroyed in a fire in July of 1895. Credit: The Swanton Historical Society

For most of its life, freight sustained the railroad along with local passenger service. Freight shipped on this line included asbestos, talc, limestone, gravel, grain, feed, dairy products, lumber, and Christmas trees. The infamous flood of 1927 caused 160 washouts and destroyed two-thousand feet of bridges and trestles, mostly along the profitable thirty-mile segment between Cambridge Junction and Hardwick. In the 1930s, passenger service declined, though freight remained profitable.

In 1948, the railroad was reorganized as the St. Johnsbury and Lamoille County Railroad. At this time, the conversion from steam to diesel required costly improvements to the track and bridges to support the heavier engines. The advent of the automobile caused declining ridership and in 1956, passenger service was discontinued. The U.S. Postal Service terminated a profitable mail contract that same year. In 1973, the State of Vermont purchased the railroad, renaming it the Lamoille Valley Railroad (LVRR) in 1978. Important businesses such as talc and asbestos companies closed in the 1970s. Excursion trains ran in the 1980s, but the track was not maintained. The LVRR ceased operation in 1994, and in 2002 the State of Vermont began converting the LVRR to the LVRT.

The Lamoille Valley Railroad is historically significant as a good example of rural, east-west rail service in northern New England. The railroad contributed to the development of rail communities such as Sheldon Junction, Morrisville, Hardwick, and St. Johnsbury. The railroad provided valuable freight and passenger service to the communities along its route, stimulating industrial, commercial, and agricultural growth.

The design and permitting of the LVRT began in 2009. It took several years to inventory and permit the entire length. The trail conversion work includes clearing and grading, drainage remediation, bridge replacements and rehabilitation, sign installations, and crossing improvements. The Vermont Association of Snow Travelers (VAST) began construction on the LVRT in 2014 with the segment from St. Johnsbury to Danville, which was completed in 2015. An additional segment from Morristown to Cambridge was completed in 2017 with the replacement of Bridge 68 in Cambridge. VAST completed approximately 33 miles of trail which was funded using 80 percent federal dollars through VTrans, with the remaining amount from town assistance, private donations, and VAST’s own investment.

VTrans assumed responsibility for construction of the remaining 49 miles of trail in 2018. The remaining construction includes the rehabilitation of 37 bridges, several hundred culverts, and approximately 20 cattlepasses, repairs to approximately 50 embankment washouts, and dozens of roadway crossings. In 2020, funding for the completion of the LVRT under an accelerated schedule was approved due to the tremendous efforts of Governor Scott which allocated $2.8 million of the Governor’s FY2021 budget towards the construction of the LVRT. This funding was matched by $11.3 million in federal funds.

In the summer of 2021, an additional segment opened between Sheldon and Swanton expanding the trail to include a total of 45 miles of completed trail. The remaining work is anticipated to be completed by the fall of 2022 and includes a priority bridges contract and three segments of trail. 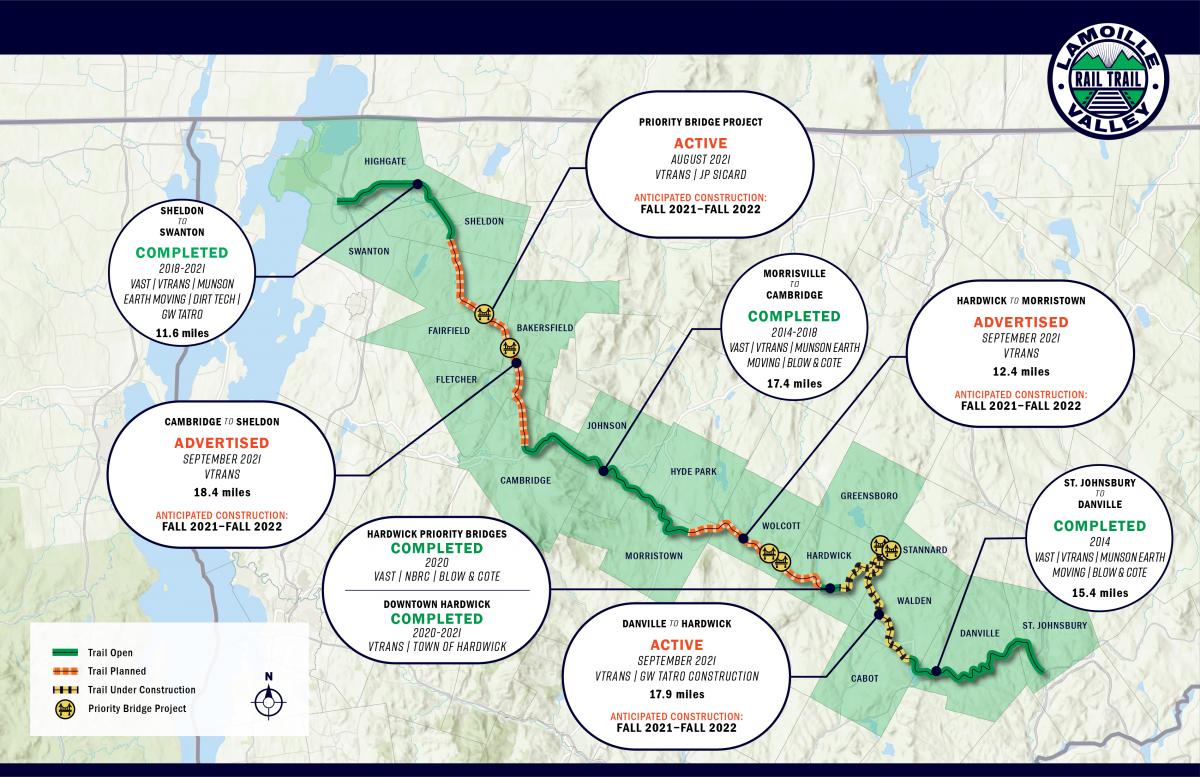