The VTrans Bicycle Comfort Input Map has been finalized and is the final product of Phase II. The map represents the levels of comfort that a bicyclist may experience on Vermont state roadways (based on data available October 2017). The map is a planning tool intended to assist the Agency to better inform decision making during corridor planning, prioritizing bicycle improvements in projects and maintenance activities, and defining project scopes.

The VTrans Bicycle Corridor Priority Map has been finalized and is the final product of Phase I. The map represents current and potential bicycle use on state roads. Bicycle use was quantified through analysis of land use patterns, bicycle access to state roads, proximity to destinations, data collected on recreational bicycling using StravaMetro data, and public input through the project’s interactive crowdsourcing map (aka WikiMap), in combination with a qualitative smoothing process using VTrans’ experience managing state roads. 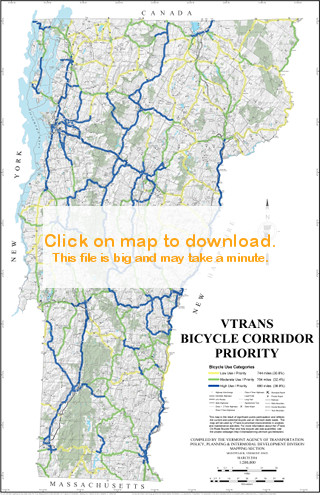 This map was presented at the Statewide Meeting #3 on December 1, 2015. 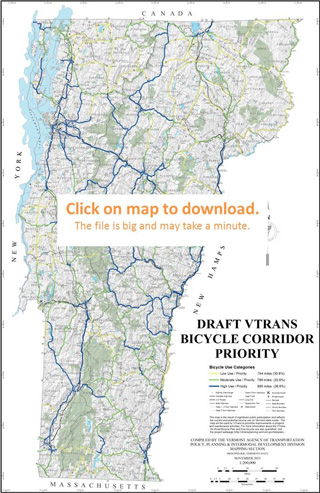 The Draft Desirability Map is shown below, however this map has been replaced with the VTrans Bicycle Corridor Priority Map in response to the comments received.

The interactive crowdsourcing map (aka WikiMap) was part of the development of the VTrans On Road Bicycle Plan. VTrans used this crowdsourcing tool to gather information from the public about current and potential bicycle use. This was captured by asking users to select a line type when mapping a ride. The line types included:

In addition to the public input through the WikiMap and public meetings, VTrans has acquired Strava Metro data. Strava Metro is an on-line application used by bicyclists to track recreational and commuting bicycling trips. The Strava data will help to inform this project along with many common transportation data sources.