What is happening on Barre – Montpelier Road (US Route 302) in Berlin?

VTrans has a resurfacing project under contract that includes the portion of the Barre-Montpelier Road from roughly the Wayside restaurant at the northwest end to the Barre City line, just south of Highland Avenue. This corridor has a crash history of 49% of crashes being rear-end, sideswipe and left turn conflict crashes. These types of crashes are reduced dramatically when two through lanes in one direction are replaced with a single through lane and a continuous left turn lane, also called a 'Road Diet'. VTrans and the Town of Berlin desire better conditions for bicyclists in this corridor. By eliminating a through lane in each direction, space is created for on-road bicycle lanes. For much of the corridor being paved, there is also enough space for a striped buffer which will make the bike lanes even safer by further separating them from motor vehicle traffic.

Learn more about this project from the Barre-Montpelier Road Diet Video or on Berlin/Barre Area Construction Updates.

How will we evaluate whether the road diet is working?

A detailed monitoring and evaluation plan will be developed prior to starting field work. As a minimum, the consultant will collect the following information:

What are the safety benefits? 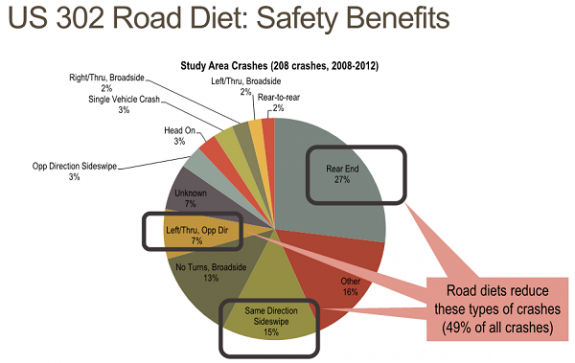 Won’t the corridor be more congested with the lane reconfiguration?

The peak hour (highest traffic volume) traffic is about 600+ cars going in one direction. According to the Highway Capacity Manual, a single lane can carry an average of 1,750 cars per hour. Turn lanes will still be provided at signalized intersections. We will be monitoring the performance of the intersections during the trial period.

There’s a bike path in Montpelier. Why don’t bicyclists use that?

Just like everyone else who needs to either travel through the Barre-Montpelier Rd. corridor, or access the many businesses and services that exist there, bicyclists need to use this corridor. By eliminating the unnecessary travel lanes that exist currently, space for bicycle lanes is created and the corridor will better meet the transportation needs of Vermonters.

It just doesn’t make sense. You can’t take away travel lanes where they currently exist.

Dozens of Road Diets have been successfully implemented across the country. Most states that have adopted policies around Road Diets don’t even require traffic analysis or trial periods for road diets on roads with annual traffic volumes less than 15,000. The traffic volume at the busiest section of Barre – Montpelier Rd. is under 14,000. In any case, we will be monitoring the corridor for any traffic issues that arise.

Won’t it be less safe?

Based on the experience of many Road Diets across the country and in Vermont, the corridor will be safer. The two way left turn lane removes turning vehicles from through lanes and removing the outside through lane will help reduce side swipe and rear end crashes. Currently bicyclists have no dedicated space on the roadway, so the addition of bike lanes will make it much safer for them to travel the corridor.

Why should we pay for bike lanes?

The cost of providing the bike lanes is minimal. As part of all resurfacing projects, the road must have temporary (during construction) and new striping applied. The addition of bike lanes requires a small amount of extra pavement markings only as there is plenty of roadway space already available. This is a very cost effective way to provide some roadway space for bicyclists while making the corridor safer for drivers.

How will the Road Diet impact pedestrians?

Generally, road diets are better for pedestrians as it eliminates the “multiple threat” type of crash where a car in the near lane stops for peds, obscuring the view of the far lane car and the view by the pedestrian. There is only one lane to cross at a time. Also, in the case of 302, in the interim, before the Town planned sidewalks are built, it is possible that peds could walk in the bike lanes (although that is not their intent).