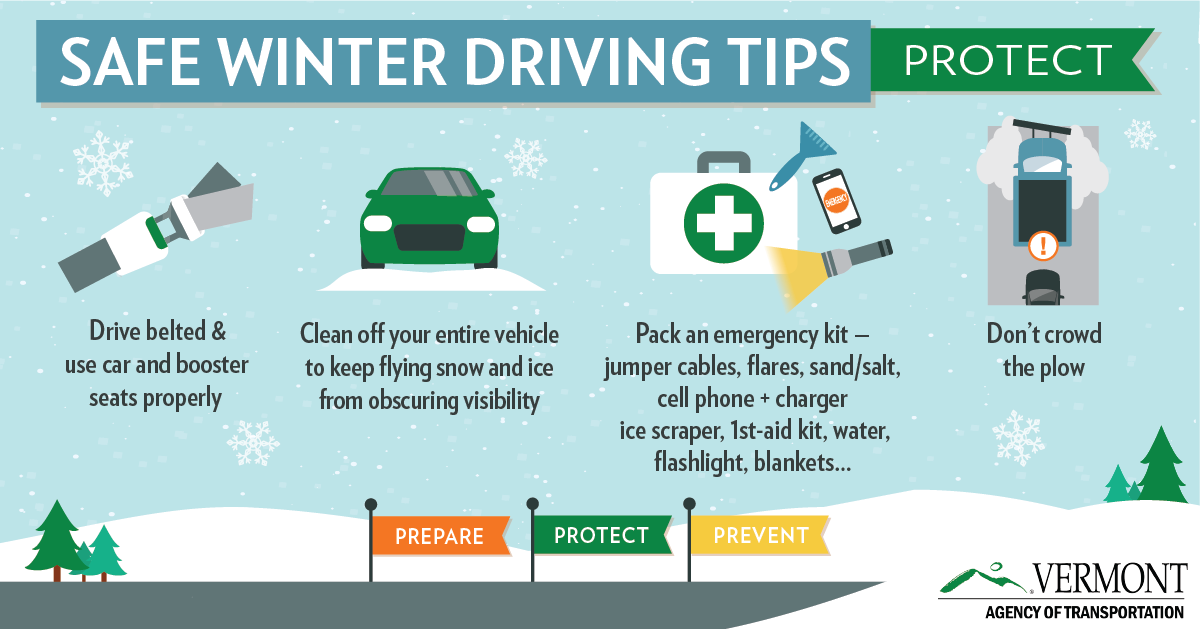 What is VTrans’ Policy for winter maintenance, and where did it come from?

Vermont has a “safe-roads-at-safe-speeds” policy for winter storms.  Since its adoption by the General Assembly in the early 1980’s, that policy has directed us to keep highways plowed, salted, and sanded to keep them open to traffic, and to maintain them to a degree that allows motorists to use them at reasonable speeds.  This policy requires that drivers partner with us, use good judgment, and understand that during a storm Vermont’s roads will be covered with some snow.  Roads will not become bare until after the storm is over. VTrans crews are among the nation’s best at snow and ice control, but all drivers need to slow down and drive according to the conditions.

After the storm, highways are returned to bare pavement on a “corridor priority” schedule based on the highway’s “level of service”.  Interstates, for example, take priority over lightly traveled rural highways.

To better explain our winter maintenance practices, including what motorists can expect from VTrans during a winter storm, we’ve developed a Snow and Ice Control (SIC) Plan.

What would it cost to have a “bare roads” policy?

A bare roads policy would require us to more than double the number of our maintenance staff and add additional plow trucks and facilities.  This, along with the additional usage of sand, salt, and fuel, would cost many millions of dollars more than our current budget.

There are also environmental impacts associated with spreading too much sand and salt on our roads.  More salt also contributes to corrosion of our vehicles and infrastructure.

Vermont and other “snow states” have stated that a bare roads policy is not practical during storm events.

Do town roads get cleaned up more quickly than state highways?

Quite often the answer is "yes."  Towns often use considerably more salt than we do, and as a result, they can often obtain bare roads very quickly.

Do neighboring states have better road conditions during storms?

Occasionally, they do.  VTrans has less equipment and fewer people doing the work than our neighboring states.  We also have some of the longest plow routes in New England.  Vermont plow routes can take an average of 1½ to 2 hours to complete.  As such, drivers may come across roads that have not been plowed and treated for some time.  Some other states run two full shifts; we simply don’t have the staff to do that.

It is important to note, however, that our neighboring states have winter maintenance policies that are virtually identical to Vermont’s.  None of them call for bare roads.

As a side note, we meet regularly with our counterparts from Maine and New Hampshire, and we hear that they get asked this question in reverse --- “why are Vermont’s roads better than ours!”  The answer may simply be the timing of your arrival relative to the plow truck’s most recent pass.

What resources does Vermont have at its disposal for winter maintenance?

Our Maintenance Section is 500 people strong, about 450 of whom are the supervisors, maintenance workers, equipment operators, and mechanics who work hard in 65 locations around the state to plow snow.  Our fleet includes 275 plow trucks, 60 loaders, 8 graders, and approximately 100 heavy duty pickups with plows.

What is Liquid Salt, and why do you use it?

Liquid Salt is nothing more than salt (Sodium Chloride) dissolved in water.  When we drop dry salt onto a snowy road, it melts the snow and produces liquid salt.  In order to “jump start” the melting process, and to minimize the amount of salt that bounces into the ditches, we typically dissolve some of our regular road salt in water and spray it on our dry road salt as it leaves the truck.  In some cases, we may apply liquid salt directly to a road to prevent ice from forming, or to quickly melt packed-on snow or ice.

The salt we typically use is sodium chloride, the same as on your dinner table at home.  Sodium chloride only melts snow effectively down to about 15 degrees.  When it is very cold, VTrans mixes a liquid additive into dry road salt or liquid salt to make it more effective at lower temperatures.  We use a product that is essentially water, another salt (magnesium chloride), and a corrosion inhibitor.  This liquid additive is actually less corrosive than our regular road salt.

The primary advantage of liquid salt is that it allows us to use less total salt to achieve our safe-roads-at-safe-speeds policy.  Using less salt saves money, reduces our environmental impact, and minimizes corrosion.  Most other states use liquid salt, as do a number of Vermont towns and businesses.  It is considered a “best practice” in the industry.

Is Liquid Salt responsible for the rust on my vehicle?

Road salt and moisture corrode metals.  That is true if the salt is dissolved in water ahead of time, or if it mixes on the road with snow and ice melt.  Concern about corrosion is one of the reasons we strive to use as little salt as necessary to meet our policy.

The Liquid Salt and Liquid Magnesium Chloride we add to our granular road salt when temperatures are below 15 degrees F are less corrosive than regular granular road salt.  In response to concerns from our customers, we have recently switched to an additive that we believe will be less “sticky” and may help minimize the amount of salt that clings to our cars and should make it easier to clean off.