NOTE: If it has been determined that there is an untimely death involved, the crash type is classified as “2. Injury”. (See Injury section later in this document.)

B. Vehicle 1 Collided With - Enter the code in B1 for what Vehicle #1 first collided with. For instance, if the vehicle collided with a deer in the roadway, then went off the road and hit a tree, only the first action indicating a deer collision (6) is entered in B1. The second action, hitting a tree (15), would be entered in B2.

NOTE: There is no Section C.

D. Direction of Collision – This box is used for various types of collisions, including those involving turns or angle collisions. Enter the appropriate numeral for the collision. 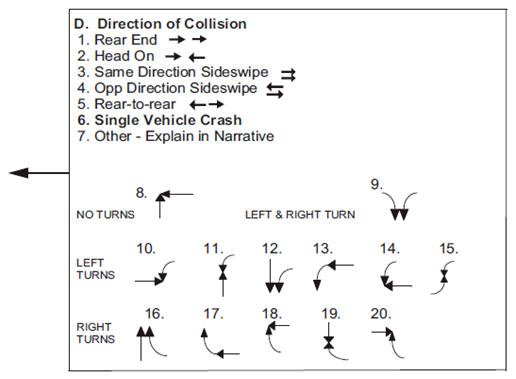 E. Traffic Control - Identify the type of traffic control which was present at the scene of the crash. Enter the appropriate code in Box E. Select the single type that was in control at the time. For example, an officer may direct traffic through a stop sign without having to stop traffic.

F. Weather Conditions - Enter the code that best describes the weather condition at the time of the crash. If more than one code applies, enter the code which you believe influenced the crash the most. 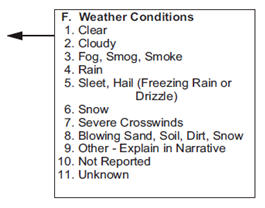 G. Light - Enter one code, which indicates the light condition at the time of the crash. 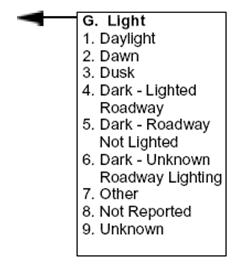 I. Road Align (Alignment) - Fill in the code that best describes the curvature of the roadway.

J. Road Design - Enter the code that describes where the crash occurred. Note that the curvature of the road is not considered for this item. 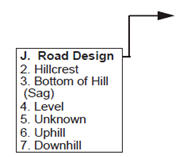 K. Road Type - This entry identifies the road type on which the crash took place. Select the code that best describes the roadway surface materials. If “other” is selected, describe in the narrative or a notation.

L. Surface Condition - Select the one code that describes the condition of the roadway’s surface at the time of the crash.

M. Contributing Road Conditions - Use this field to describe any road conditions that may have contributed to the crash. 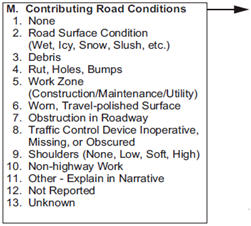 N. Police Photo/Video Recording Taken – Enter 1 for “yes” or 2 for “no” as to whether or not a police photo was taken or a video recording was made of the crash scene.

The remaining two boxes on overlay 1 are to be used for input into the “Operators, Occupants, Pedestrians, Cyclists” section on page 3. 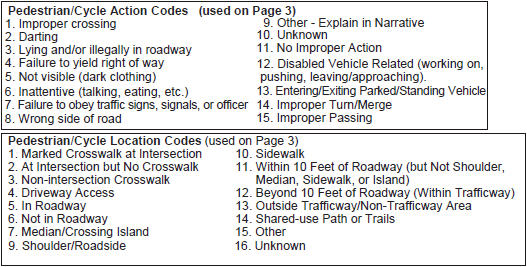