O. Apparent Operator Condition - Enter the primary code in box O1 that best describes the operator’s condition in Vehicle 1 at the time of the crash. If a secondary operator condition was apparent at the time of the crash, enter one code which best describes the condition. A secondary condition would be one that was less important than the primary condition but still evident. Enter the same information for the operator of Vehicle 2 in boxes O3 and O4. 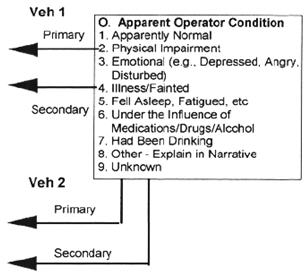 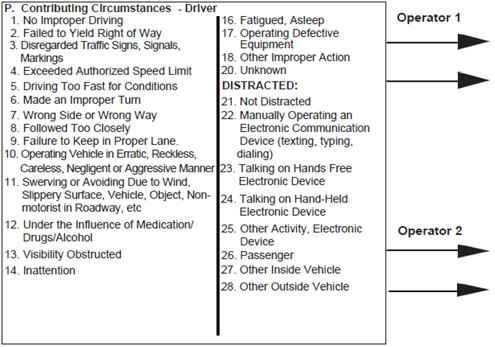 U. Perceived Race-Driver – This information is collected for every operator.

T. Sequence of Events - Identify and order the events of the crash relating to each vehicle. Enter the proper code numbers in the order in which the events occurred. Many crashes will not have more than one event, but indicate all that apply.

ONLY LARGE TRUCK/BUS (COMMERCIAL VEHICLES ONLY) 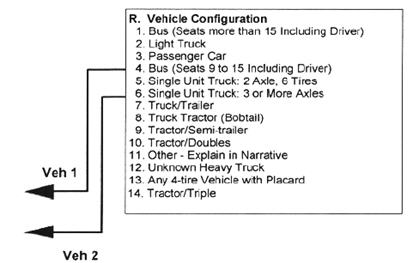 S. Cargo Body Type - Enter the code that best describes the cargo body type for Vehicle 1. If applicable, enter the appropriate code for Vehicle 2. (See Appendix B for picture descriptions.) 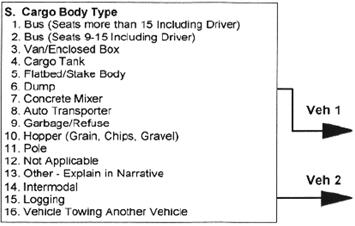 Note to Web Crash users: If “Comm Veh” question on page one was noted as “N” (no), then boxes R and S will be grayed out (inaccessible).