The Vermont Agency of Transportation (VTrans) and the Burlington Department of Public Works (Burlington DPW) are improving roadway conditions for all users along US Route 7 (Shelburne Street) in Burlington. Following a 2002 Shelburne Road Rotary Redesign Project report, the area was deemed a high crash location. The Report identified issues with the intersection, including excessive traffic queuing during peak commuting times, an increase in local and commuter traffic, increasing traffic speeds through the existing rotary, and difficulties for pedestrians to cross the rotary. This joint initiative includes enhancements designed for safety, capacity, and in compliance with the State’s Highway Safety Improvement Program (HSIP). Project elements include:

The installation of a modern single-lane roundabout along Route 7 offers a multitude of benefits including;

2002 – Burlington DPW staff began work with consultants to develop design alternatives and estimated project costs for improvements to the rotary intersection of Shelburne Street, Locust Street, South Willard Street and Ledge Road. Two alternatives were identified and described: a roundabout accommodating four or five of the streets and a signalized intersection accommodating four or five of the streets. The City pursued inclusion of the project in the Chittenden County Regional Planning Commission (CCRPC) work plan to secure funds and position the project in the Transportation Improvement Program (TIP) either as a highway project or with funds provided by the State of Vermont Enhancement program.

2007 - VTrans notified the City that this intersection had risen in prominence on the list of the State’s High Crash Listings (HCL) and that there were funds available to take corrective action through the State’s Highway Safety Improvement Program (HSIP). Since the identification of the intersection as a high crash location, the 2002 Study needed to be reviewed and updated. City staff, VTrans staff and CCRPC staff met to identify actions required to update that work and hired Resource Systems Group, Inc. (RSG) to complete the study and facilitate the identification of a preferred alternative. The RSG process included:

2015- Clough Harbour and Associates (CHA) and CARDNO were contracted to locate the subsurface utilities in the project vicinity, excavating a portion of the project area in order to locate utility depth and conflict points accurately.

2019- VTrans and DPW secured all rights-of-way required for the construction of the proposed single-lane roundabout.

2020- A joint investigative project between VTrans and the Vermont Department of Environmental Conservation (DEC) launched within the project site to determine levels and types of contaminated soils and groundwater to be characterized such that they can be properly handled in the event they are encountered by the contractor during construction.

The current intersection of US Route 7, ALT US Route 7, Locust Street and Ledge Road is a 5-approach intersection in a residential neighborhood with schools and small businesses in the area. The rotary intersection is too small and restrictive for certain movements, and there is limited sight lines and sight distance. The existing intersection has developed user safety issues over the years due to a change in commuting patterns, high vehicular speeds, lack of dedicated bicycle facilities and difficulties for pedestrians crossing the streets. The intersection has been listed on VTrans’ High Crash Location list since at least 1998. In addition, the underground utilities are aging, and the area lacks modern stormwater treatment. 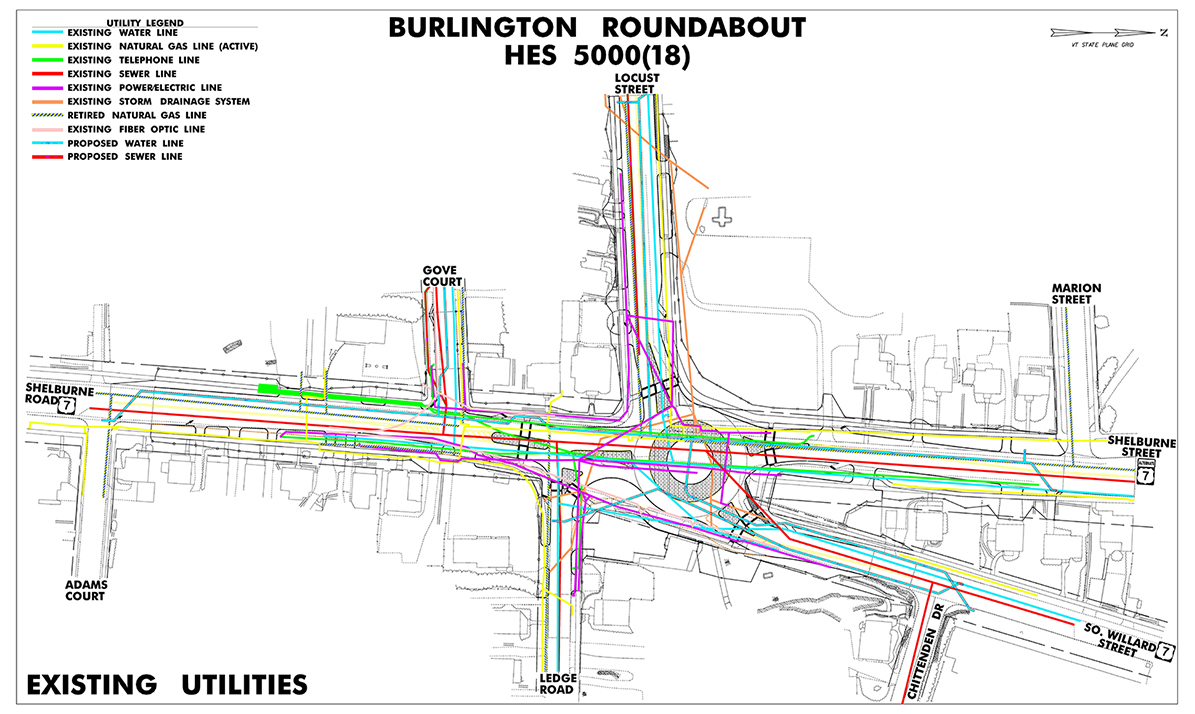 No additional blasting operations are anticipated.